Warning: Declaration of PageLinesFeatures::section_head($clone_id) should be compatible with PageLinesSection::section_head() in /home/marymu5/public_html/wp-content/themes/pagelines/sections/features/section.php on line 973
 COWGIRLS | Mary Murfitt

THE STORY: Jo is in a pickle: She has twenty-four hours to save Hiram Hall—her father’s once-famous country-western saloon in Rexford, Kansas—from foreclosure. Although the place has seen better days, Jo is determined to keep it open. But what will pack in a crowd to make the money she needs? Mickey, Jo’s hard-livin’, wise-crackin’ waitress has been dyin’ to get up on that stage and prove she’s got what it takes to make it as a country singer, and Mo, Jo’s cook/cashier, is right behind her. But Jo has other plans: She’s booked the Cowgirl Trio, sure it will save the place. The problem is there is no Cowgirl Trio. A minor misunderstanding on the telephone brings to Rexford the Coghill Trio: Rita, Lee and Mary Lou, classical musicians currently on a reunion tour. Jo isn’t looking for classical music but the Coghill Trio show up for a legitimate booking. These six women surely mix like oil and water: Jo could have had a brilliant career as a country singer herself, but gave up her dream to run her daddy’s business; Mickey feels she must have this chance to perform or all her dreams will slip through her fingers; Mo can’t bear to think that Jo might lose the place and will do anything to help her keep it; Rita planned the current tour of the trio because she and her husband are about to have their first child and she’s not sure she’ll ever perform again; Lee, always searching, has begun to feel like she’s never going to find what she’s looking for and feels they should give Hiram Hall a chance; Mary Lou, just about to bust from following rules all her life, can’t stand that Hiram Hall is not a real booking and sees her career as doomed. Fate must have brought these women together and they side out—it’s classical versus country. Can they meet in the middle? Sure thing, and when Jo proudly presents to the public the Cowgirl Trio, you can bet your bottom dollar that it raises the roof and Jo saves her bar! 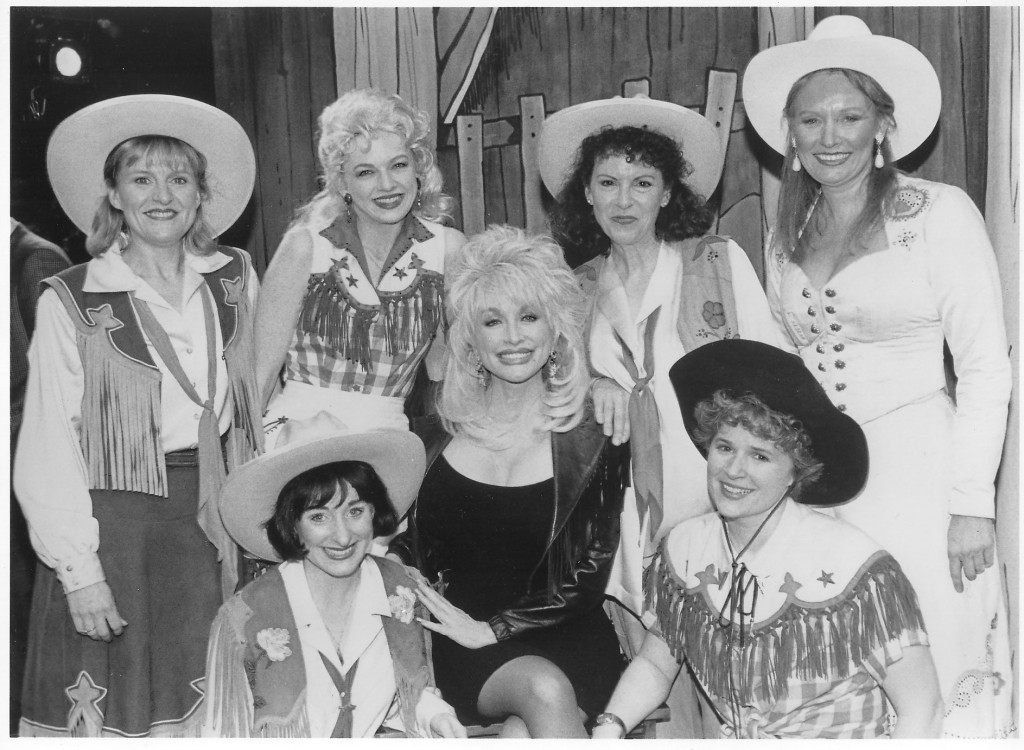 ” ‘Cowgirls’ is smart enough to give each member of the trio her own quirky personality. Rita (Ms. Ehlinger), its pianist, is married, pregnant and scared of being trapped in a domestic treadmill once she becomes a mother. Its cellist, Lee (Ms. Fischer), is a lesbian who spouts mystical mumbo jumbo about her chakras and Mercury being in retrograde. The intransigently nerdy Mary Lou (Ms. Murfitt), who plays the violin, has to be bullied out of her uptightness, but once she gets the country spirit in a song called ‘Saddle Tramp Blues,’ she turns into a wild woman.”

“…the score for ‘Cowgirls’ has great fun giving familiar classical themes the country treatment. The show’s biggest asset is that the members of the trio — Ms. Murfitt, Mary Ehlinger and Lori Fischer — are as adept classical musicians as they are comic performers.”

“…wrings every last drop of tipsy moonshine humor from its crossbreeding of classical and country.”

“…I thoroughly enjoyed ‘Cowgirls’, a craftily packaged and brilliantly performed musical entertainment now at the Minetta Lane Theater, where it should remain at least until the cows come home.”

“…the show has been conceived by Mary Murfitt, who has contributed the extraordinarily adroit music and lyrics”

“The songs are sweet and humorous, usually with a surprisingly genuine sound to them, and the casting proves simply sensational, because all of these women have to act, sing and play multiple instruments oftenin varying disciplines.”

“…lively tunes and easy humor, ‘Cowgirls’ is as warm as a heated mobile home.”

“The show’s at its best when it points out the ties between musical styles, one character noting that country songs consist of three chords “over and over” that can be easily traced to classical roots.”

“The cast is zingy, especially Rhonda Coullet as the bar’s salty proprietor, while composer Murfitt–who also co-authored and appeared in ‘Oil City Symphony’–has funny moments as a prissy violinist.”

“instead of fake-folk show tunes, we get astutely theatricalized country music, carried off by the personable performers with a musicianly skill”

“…the cast’s so appealing, and the music they make so good…”

“I didn’t count the number of instruments everyone played, or the styles they sang in, but the effect is impressive.”

© 2018 All original content (including music & lyrics) are owned by Mary Murfitt.
All rights reserved.